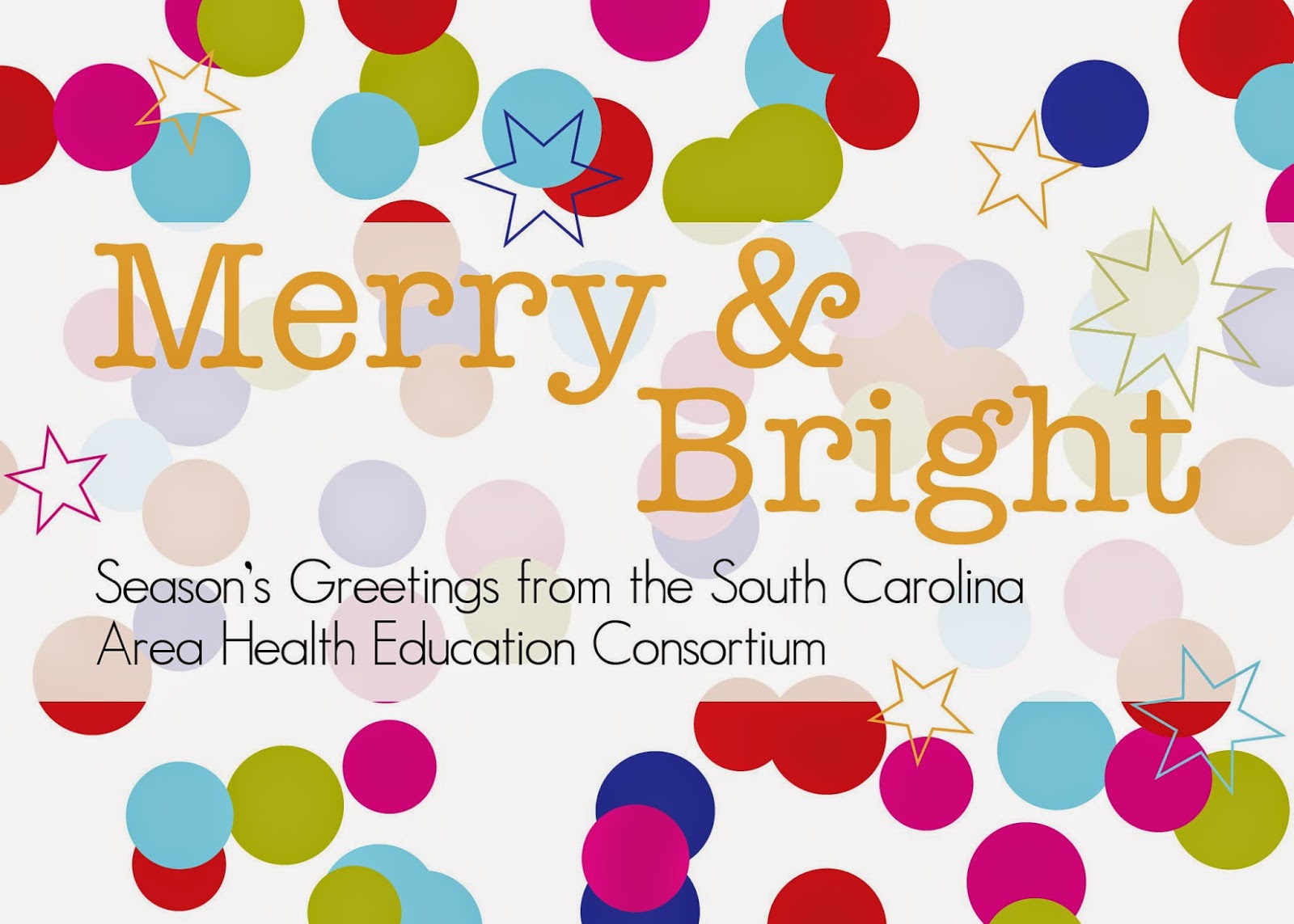 Posted by South Carolina AHEC at 10:04 AM No comments:
Email ThisBlogThis!Share to TwitterShare to FacebookShare to Pinterest
Labels: December 2014 edition

Dr. Abercrombie Named Preceptor of the Year by VCOM

Dr. Stoney Abercrombie, Director of Medical Education at AnMed Health, was recognized as the 2013-2014 Preceptor of the Year by the Edward Via College of Osteopathic Medicine (VCOM) Medical School for Excellence in Student Clinical Education. VCOM Associate Dean Dr. Paul Switzer presented the award at the annual AnMed Health medical staff dinner meeting on October 2.

A native of Six Mile, SC, Dr. Abercrombie is a graduate of Clemson University, MUSC, and the Family Medicine Residency Program of the Greenville Hospital System. He served as a flight surgeon in the United States Army for two years and practiced for eight years in Seneca prior to entering academia. Dr. Abercrombie has previously served as the Family Medicine Residency Training Director at both AnMed Health and Self Regional Healthcare, as well as serving as the Executive Director of the South Carolina AHEC.

Please join the South Carolina AHEC in congratulating Dr. Abercrombie on his achievements!
Posted by South Carolina AHEC at 9:49 AM No comments:
Email ThisBlogThis!Share to TwitterShare to FacebookShare to Pinterest
Labels: awards, December 2014 edition


Lowcountry AHEC’s permanent home at 87 Academy Road in Walterboro is scheduled to be completed sooner than anticipated at the end of January. Walterboro is the center of the Lowcountry AHEC service area and is a convenient location for health professionals and students to meet. In addition to housing the staff, the building will have a 1,000 square foot classroom/training room and a conference room. Both will have videoconferencing capabilities. Lowcountry AHEC is excited as the long-awaited project nears completion and looks forward to continuing to serve the communities in its 12-county region. 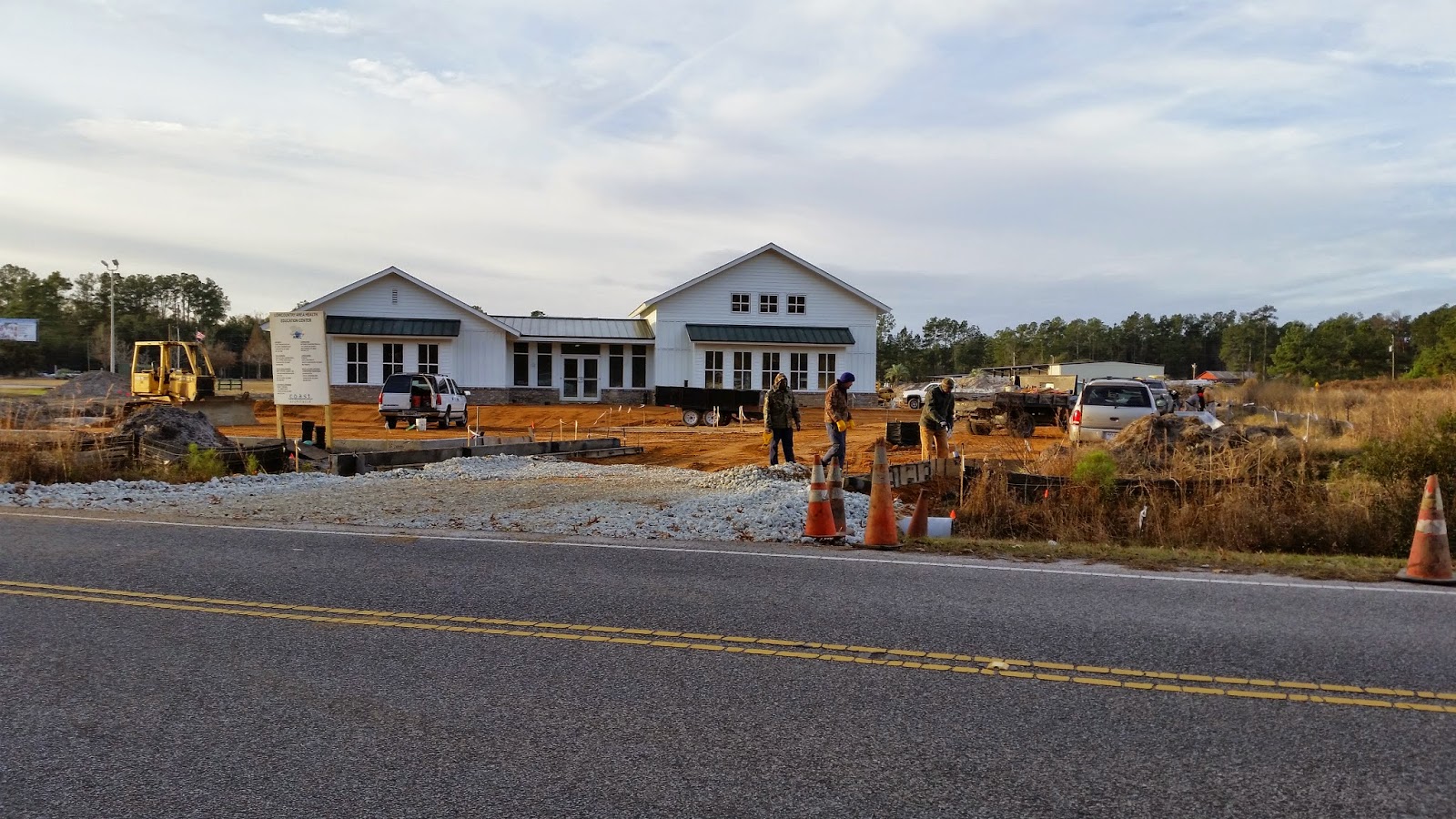 Posted by South Carolina AHEC at 9:47 AM No comments:
Email ThisBlogThis!Share to TwitterShare to FacebookShare to Pinterest
Labels: December 2014 edition, Lowcountry AHEC

The South Carolina AHEC is pleased to announce that applications are currently being accepted from primary care physicians (Family Medicine, Pediatrics, Internal Medicine and Ob/Gyn) and advanced practice professionals (nurse midwives, nurse practitioners and physician assistants) who contract for a period of four years to practice in rural or underserved areas of South Carolina.

Awards for advanced practice professionals will vary, with the minimum award being $30,000 and the maximum award being $50,000, depending upon the type of practice setting and the population of the county.
Specifically, the State Incentive Grant Program may:

Applications for incentive grants for the upcoming year that begins on July 1 will be accepted until March 1.

Lowcountry AHEC works diligently to increase the number and diversity of students entering the health professions pipeline. The Lowcountry AHEC Summer Internship Program serves as a vehicle for accomplishing this goal by offering career exploration opportunities for graduating high school seniors and undergraduate students. Selected students are placed in Lowcountry healthcare facilities for four weeks in July. Students are provided opportunities to observe a healthcare setting and develop their personal and professional skills through special student sessions. Students who successfully complete the program are awarded a $500 stipend. Lowcountry AHEC has achieved great success through this program.

Lowcountry AHEC Health Careers Program Coordinator Natasha Chatman shares, “Our interns are awesome, and they really impress the preceptors at our clinical sites.” Kristin Blair, a senior at South Carolina State University, served as an intern with Edisto Dental Associates (EDA) in Orangeburg last summer. Due to her excellent performance, EDA convinced Ms. Blair to continue her experience beyond the program as a hired employee. Lowcountry AHEC proudly reports that she is only one example of the quality students who enter the healthcare pipeline through Lowcountry AHEC programs.

Applications for both programs will be available after January 15. To find out more information and obtain applications, visit the Lowcountry AHEC website or contact Natasha Chatman at chatmann@lcahec.com. 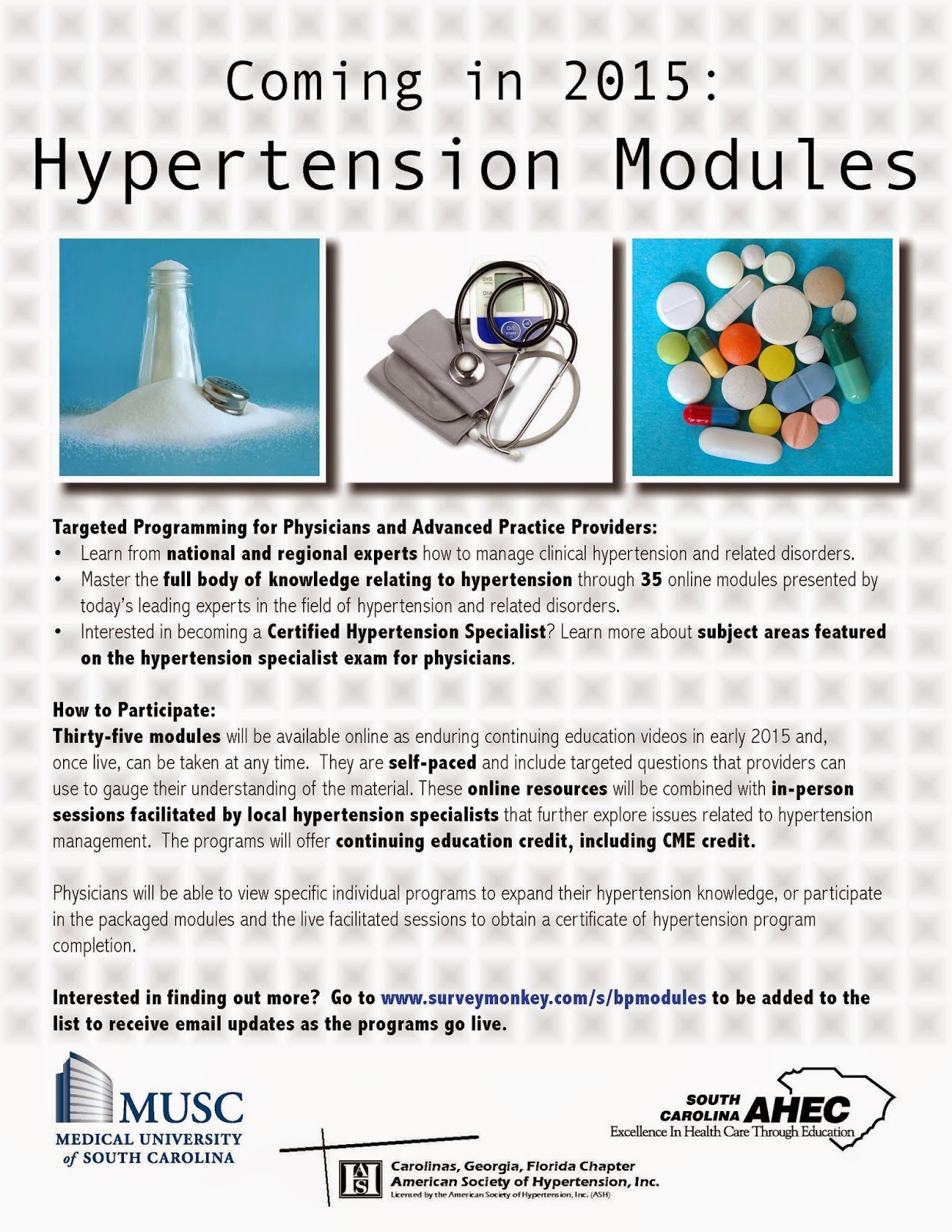 Specially targeted hypertension modules will be available as enduring continuing education videos in early 2015. To learn more, check out the flyer or sign up for email updates.
Posted by South Carolina AHEC at 9:19 AM No comments:
Email ThisBlogThis!Share to TwitterShare to FacebookShare to Pinterest
Labels: CME, continuing education, December 2014 edition, hypertension modules 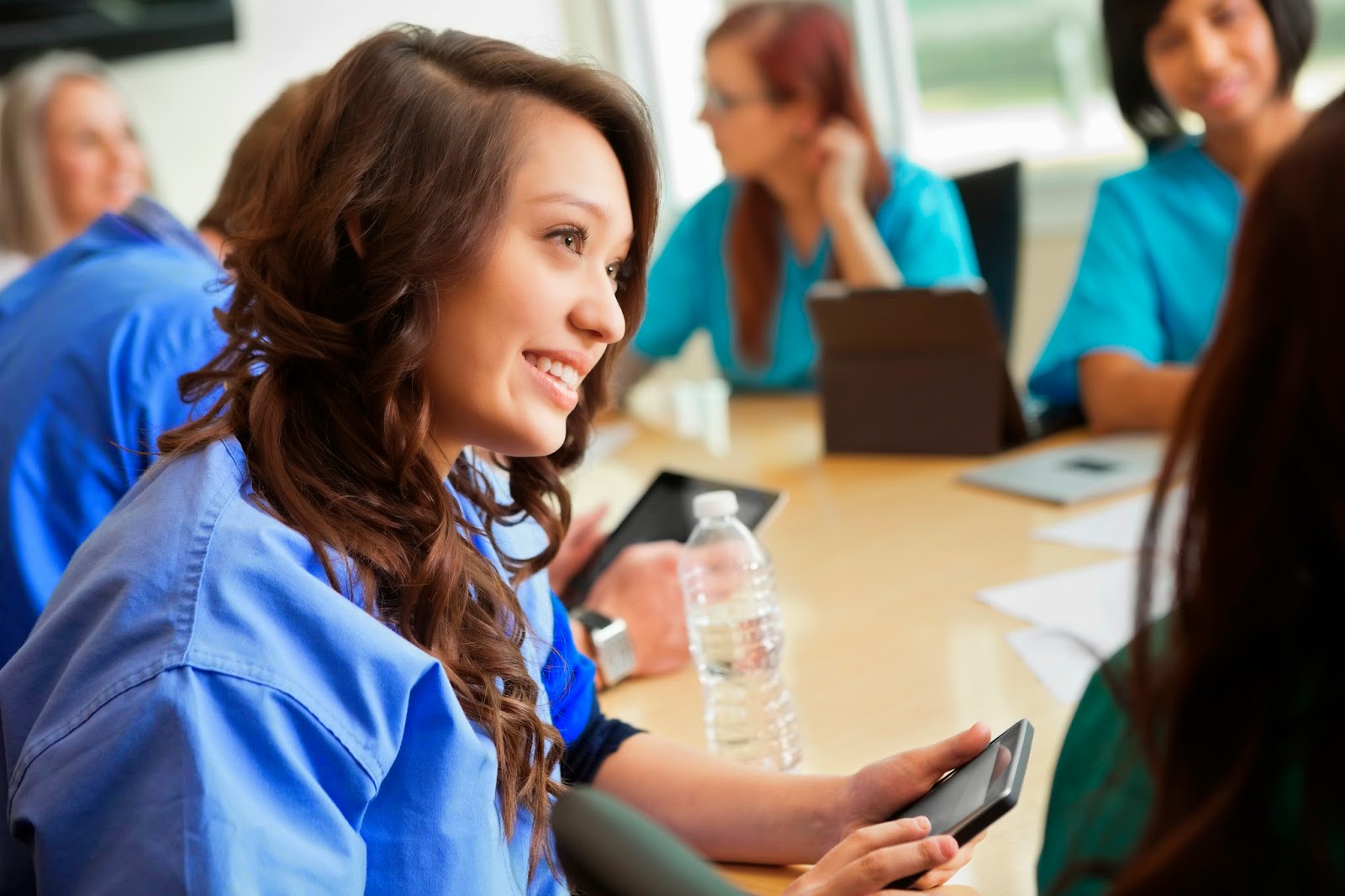 The 34th Annual South Carolina School Nurse Conference will be January 30-31 at the Embassy Suites, Charleston Area Convention Center in North Charleston.  This year’s theme is “Waves of Change – Oceans of Opportunities” and over 400 school nurses are expected to attend from across the state of South Carolina to celebrate school nursing and improve the ability to protect and promote health, safety, and wellbeing of school children in the state.

Awards recognizing outstanding school health efforts will be presented at the awards luncheon on January 31.

Upstate AHEC will be partnering with Hospice Care of South Carolina to offer the End of Life Nursing Education Course (ELNEC) Core Curriculum on January 13-14 at AnMed Health Medical Center Campus.  The ELNEC Project is a national end-of-life educational program administered by City of Hope National Medical Center and the American Association of Colleges of Nursing (AACN) designed to enhance palliative care in nursing. The ELNEC Project was originally funded by a grant from the Robert Wood Johnson Foundation with additional support from funding organizations (the National Cancer Institute, Aetna Foundation, Archstone Foundation, California HealthCare Foundation and the Department of Veterans Affairs). Further information about the ELNEC Project can be found at www.aacn.nche.edu/ELNEC.

To register for this course or for more information go to www.UpstateAHEC.org

Lowcountry AHEC is offering a two-day Certified Post Anesthesia Nurse/Certified Ambulatory Perianesthesia Nurse (CPAN/CAPA) Exam Prep and Review Course on February 7-8 designed to prepare perianesthesia nurses to take the CAPA/CPAN exam and to demonstrate clinical competence and knowledge of practice standards.  This course is based on the American Society of PeriAnesthesia Nurses Standards and has been approved for 16 hours of continuing education.  The course will be offered at Bon Secours St. Francis Hospital in Charleston.

For more information or to register, visit to www.lcahec.com.

Upstate AHEC, in collaboration with the Physical Therapist Assistant Program at Greenville Technical College, is offering the American Physical Therapy Association (APTA) Clinical Instructor Education and Credentialing Program on February 20-21, 2015 at Greenville Technical College in Greenville.  This program is designed for clinical instructors, center coordinators of clinical education, and academic coordinators of clinical education interested in or involved with clinical education. The program is recognized by APTA as a Clinical Instructor Education and Credentialing Program. Outcomes of the credentialing program are measured through an assessment center for physical therapy providers.  Participants apply information from the program in six simulated situations. Upon receiving a passing score in each station in the assessment center, candidates will receive a credentialed clinical instructor certificate from APTA.  The instructors, Barbara Wilson, PT, DPT, and Kristen Mason, PT, DPT, are both credentialed clinical trainers recognized by APTA.

New to AHEC U

Pediatric Abusive Head Trauma
Things Are Not Always As They Seem: Recognizing and Responding to Child Sexual Abuse
Pediatric Medication Administration
OB Series:
Puzzled About Your OB Patient? Putting the Pieces Together (Pre-Natal Care)
More Pieces to the Puzzle: Special Considerations in Pregnancy
Labor and Delivery: Fast and Furious and Full of Pitfalls
Postpartum: Busier Than Ever

Sign Up Now
For Email Marketing you can trust.