Practice of the Year Award 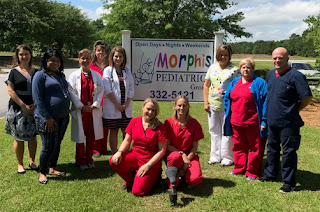 The South Carolina AHEC Practice of the Year Award recognizes practices and training sites that exhibit exemplary dedication to the teaching of health professions students and a commitment to serving their communities. The South Carolina AHEC recognizes Morphis Pediatric Group as the 2017 Practice of the Year. Dr. Elizabeth Morphis accepted the award on behalf of the practice at this year’s award luncheon.

Located in Hartsville, the entire interdisciplinary team was recognized by students who experienced firsthand the positive impact of a team effort.  One Edward Via College of Osteopathic Medicine – Carolinas Campus student, Karalyn Hillebrecht, writes:

Preceptor of the Year

I believe that for most medical students, there is usually one rotation that provides that ‘ah-ha’ moment, solidifying for the student the profession in which he or she would like to specialize”, writes one medical student, “For me that moment came while doing a family medicine rotation in Lake City, and in no small part, that moment was because of Dr. Wade Lamb.  Dr. Lamb provided me with an invaluable glance into the positive, generational impact that a family physician can have on a community, and insight into the influential role that can only be appreciated as one experiences it, and not from textbooks . . . Every patient tells a story and, with Dr. Lamb’s knowledge of each patient’s family and unique ties to the community, each patient was an opportunity to learn not just the requisite medical knowledge, but also the equally important humanistic knowledge.

These student observations are at the very crux of the South Carolina AHEC mission to attract providers to roles in rural communities. Dr. Lamb made such an impact on the student whose words are highlighted above that the student opted to practice family medicine following his clinical rotation at Carolinas Medical Alliance, Lake City Primary Care in Lake City with Dr. Lamb. It is evident how Dr. Lamb’s demeanor impacts both students and patients alike.

Because of the impact he has made on the numerous students he welcomes to family practice rotations, Dr. Benjamin “Wade” Lamb was named as the 2017 Preceptor of the Year by South Carolina AHEC. This locally grown and educated physician is a graduate of both Francis Marion University and University of South Carolina School of Medicine. He completed his residency with McLeod Family Medicine Center and began his practice in Lake City in 2003. Dr. Lamb serves as a Clinical Associate Professor with MUSC/AHEC as well as FSC Assistant Professor of Clinical Family and Preventative Medicine with USC School of Medicine.  He is a Diplomate with the American Board of Family Medicine as well as clinical faculty with Edward Via College of Osteopathic Medicine. An avid outdoorsman Dr. Lamb enjoys hunting and fishing, as well as, coaching several sports in his community.

Based on student input for his nomination, it is easy to equate Dr. Lamb’s practice as reminiscent of the small town homegrown family doctor to whom generations have entrusted their care. “The kind, compassionate, knowledgeable family physician working to heal the sick in his community is often looked upon with nostalgia from a bygone time.  Dr. Lamb is a needed reminder to students that this role lives on for the physician and is just as needed as it ever was.”

Educator of the Year

Dr. Smith began working with Mid-Carolina AHEC in 2012.  She is a licensed Social Worker that primarily works in Gerontology.  She has over 14 years of experience working with aging and vulnerable populations.  Dr. Smith provides programs related to Alzheimer’s disease, dementia, healthy aging, professionalism and ethical practices in social work.

Dr. Smith has a delightful personality and is an excellent communicator with abundant knowledge on a wide range of topics. Her presentations are engaging and she is in high demand as a speaker due to her enthusiasm and connection with her participants. Participants report that Dr. Smith exudes a commitment to the learner and developing their understanding of the material.

The South Carolina AHEC Gateway Award recognizes individuals who are committed to furthering the development of future health professionals and are distinguished in their service to students in the health careers pipeline. This year’s Gateway Award recipient is ZaQuavia Tyler.

As a Coastal Carolina student, Ms. Tyler took the initiative to charter the Bench to Bedside (B2B) Club at the University, establishing the club as a institutionally-recognized and supported organization. This included identifying a faculty champion to serve as club advisor, organizing ongoing service learning experiences for club members at a local nursing home, coordinating on-campus activities in recognition of Breast Cancer Awareness Month and coordinating two on-campus mental health first aid certification trainings for club members. In addition to being a student and organizing all of these activities, she managed the election and training of club offices while completing her final undergraduate semester. The B2B Club became her legacy when she graduated in December 2016 with a double major in biology and biochemistry. She continues to be engaged with the club as a peer mentor.

Ms. Tyler’s peers speak highly of her guidance, encouragement and mentorship, highlighting her exemplary leadership skills and her continued involvement with the club she started. 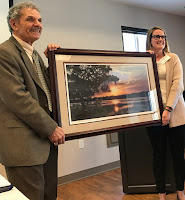 Ms. McMenamin joined the South Carolina AHEC Program Office in 2013. With nearly four years on the AHEC team, she has served on the continuing professional development council and as a continuing education and communication program coordinator, as well as on the Office for Telehealth team, before transitioning into her current role at the end of 2016.

With each task Ali approaches, she meets it with an open mind, kind spirit, and eager to better the state attitude. It is hard not to catch her delightful and meaningful attitude each morning when I walk through the door . . . Thank you for allowing me to nominate Ali for the position. In every project Ali encounters, you can see just how much she cares. That is what makes her stand out to me, she cares. She cares about improving her co-workers’ skills and knowledge, helping AHEC grow and become more recognized, and giving the citizens of South Carolina more access to the best possible health care.

Popular posts from this blog

A COVID-19 Update from Our Executive Director

March 19, 2020
At South Carolina AHEC it is our mission to serve the state to ensure each and every community has the healthcare workforce and access it needs. In times like these, it’s even more important to support our healthcare professionals and the health workforce pipeline and, as the pandemic evolves, we are here for you. Just in the past couple of days we have:  Assisted two universities in meeting requirements of their interprofessional education (IPE) curriculum by providing access to AHEC Scholars online programs Provided information about the Health Careers Program (HCP) modules to the SC Department of Education to list with their health sciences curriculum as they transition to online learning Adjusted student housing needs and protocols and assisted with relocating clinical placements while tracking new policies from many institutions Moved numerous live continuing professional development (CPD) events to webinars to help healthcare professionals maintain access to education
Post a Comment
Read more

April 15, 2016
Kelly Jones, PharmD, BCPS is recognized as the 2016 South Carolina AHEC Educator of the Year. Dr. Jones is the Associate Professor of Family Medicine in the Department of Family Medicine at McLeod Regional Medical Center in Florence. He was nominated by the Continuing Professional Development staff of Pee Dee AHEC in recognition for his outstanding contribution to the continuing professional development of healthcare providers across South Carolina and beyond. The South Carolina AHEC Outstanding Educator of the Year Award recognizes excellence in instructors of continuing education in the South Carolina AHEC system. The Outstanding Educator is selected based on their ability to present content in a practical, useful format that meets the needs and expectations of program participants while communicating the material enthusiastically. Educators must also successfully adapt presentations to address multiple learning styles.   Dr. Jones has served the South Carolina AHEC in a myriad
1 comment
Read more